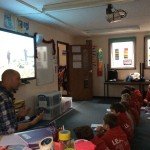 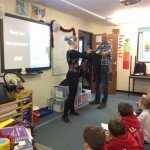 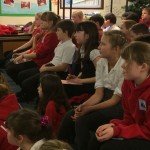 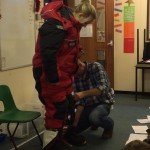 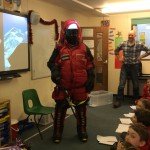 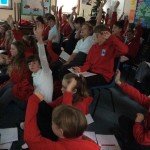 Year 6 had a visit today from Mac MacKenney – an explorer – who talked about his expedition to Mount Everest. In 2007 he was part of a huge medical research project to see how the body copes in extreme conditions. This was documented in a BBC Horizon documentary called Doctors in the Death Zone. We all began to realise that the dangers of mountain climbing go far beyond slipping and falling.

After sharing a short clip from the documentary, Mac showed many images and talked us through the grand scale of organising the trip. Later, Mac showed some of the specialist equipment needed at high altitudes and used Mrs Taylor as a mannequin. In hindsight, Mrs Taylor would have turned the heating off and opened all the windows before putting on many, many layers!

There was then an opportunity for the children to ask Mac some questions. Unfortunately, we ran out of time as it was lunch, but he has promised to continue to answer questions via email. We look forward to those responses.