The Viking Age in Britain began about 1,200 years ago in the 9th Century AD and lasted for just over 200 years. About the year 800 AD, bands of fierce raiders began to attack our coasts.

The Vikings came across the North Sea, just as the Anglo-Saxons had done 400 years earlier. In time the Vikings made their home here. They drove the Saxons out of part of the country and took it for themselves.

Explore what impact the Vikings have had on our culture today and find out what life was like living as a Viking , years ago.

Explore a range of fact files, quizzes and interactive games.

A selection of animated clips all about the Vikings. 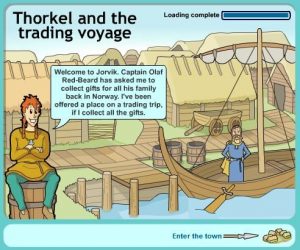